On Wednesday, the US Justice Department appointed Robert S. Mueller III, former F.B.I. director, to be special counsel overseeing its investigation into Russian involvement in the US election, and with the Trump campaign.

Here are the facts as reported by The Daily Mail:

‘With all the illegal acts that took place in the Clinton campaign & Obama Administration, there was never a special counsel appointed!’ 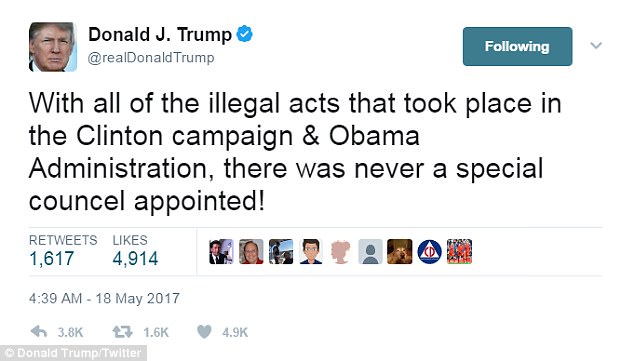 ‘This is the single greatest witch hunt of a politician in American history!’

The war between the lying left, with their army known as the Crooked Liberal Media, and the Trump Administration, just escalated to a whole new level. Wednesday night, President Trump said, ‘As I have stated many times, a thorough investigation will confirm what we already know – there was no collusion between my campaign, and any foreign entity,’ and went on to say, ‘I look forward to this matter concluding quickly,’ he said. ‘In the meantime, I will never stop fighting for the people and the issues that matter most to the future of our country.‘

President Donald J. Trump is “crazy like a fox” as a world famous doctor described him. He is smarter than anyone in the Crooked Liberal Media, and he probably knew Robert Mueller would be the special council, well in advance of the announcement. Anyone familiar with reality or the truth knows this “Russian collusion” was fabricated by the losers of the election, and is in essence, a witch hunt! Russia probably was trying their best to “hack” and meddle, but not in cahoots with Donald J. Trump, or his campaign.

Hopefully, Robert Mueller and his staff will uncover truth, and they will most likely unearth quite a bit of dirty dealings involving Barack Obama and Hillary Clinton, while doing their due diligence. President Trump is fully aware that this will happen, and this “special council” situation will be a win in the end. Now, the Crooked Liberal media will have to shut up about “Russia, Russia, Russia” for a while, while Mueller conducts his investigation, and President Trump can spend his time Making America Great Again!

** If you support President Trump and think he knows EXACTLY what he is doing, please SHARE this article now! The Crooked Liberal Media will hide the TRUTH.

Moments Ago, Pres Trump HUMILIATED Nancy With EPIC BLOW She Will Never Forget