Our amazing President has ordered all federal flags to be flown at half-staff tomorrow to honor the memory of John Glenn, who was the first American to orbit the earth, and whom will be honored at Arlington National Cemetery tomorrow. President Trump is the best, and you would never see Obama doing such a great act for an American Hero!

In a tweet sent out by Sean Spicer, he stated “Tomorrow @POTUS has ordered flags at all federal entities & institutions to be flown at half-staff honoring memory of former Sen. John Glenn.” (SEE BELOW)

Tomorrow @POTUS has ordered flags at all federal entities & institutions to be flown at half-staff honoring memory of former Sen. John Glenn pic.twitter.com/dZYzYXgFPp

(READ MORE ABOUT GLENN BELOW) 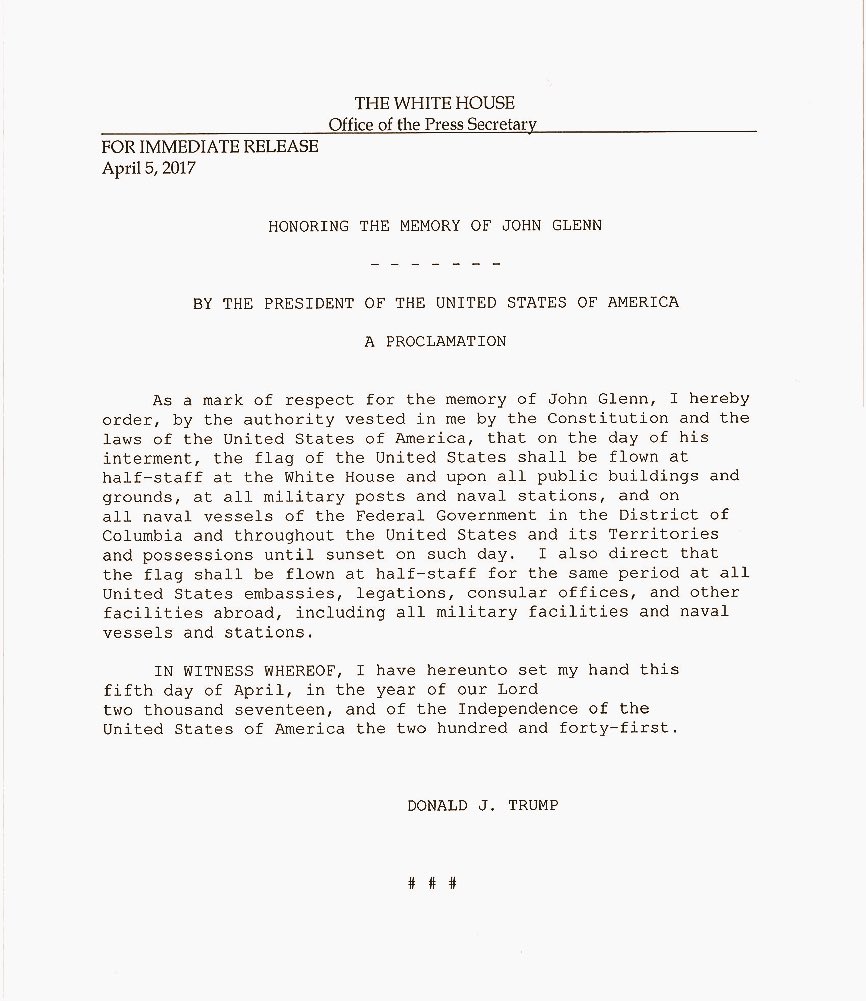 Who is John Herschel Glenn, Jr.?

According to Wikipedia (July 18, 1921 – December 8, 2016) Glenn was a United States Marine Corps aviator, engineer, astronaut, and United States Senator from Ohio. In 1962 he was the first American to orbit the Earth, circling it three times. Before joining NASA, Glenn was a distinguished fighter pilot in World War II and Korea with six Distinguished Flying Crosses and eighteen clusters on his Air Medal.

He was one of the Mercury Seven, military test pilots selected in 1959 by NASA as the United States’ first astronauts. On February 20, 1962, Glenn flew the Friendship 7 mission; the first American to orbit the Earth, he was the fifth person in space. He received the NASA Distinguished Service Medal, the Congressional Space Medal of Honor in 1978, was inducted into the U.S. Astronaut Hall of Fame in 1990, and was the last surviving member of the Mercury Seven.

After Glenn resigned from NASA in 1964 and retired from the Marine Corps the following year, he planned to run for a U.S. Senate seat from Ohio. An injury in early 1964 forced his withdrawal, and he lost a close primary election in 1970. A member of the Democratic Party, Glenn first won election to the Senate in 1974 and served for 24 years until January 3, 1999.

In 1998, still a sitting senator, Glenn was the oldest person to fly in space as a crew member of the Discovery space shuttle and the only person to fly in both the Mercury and Space Shuttle programs. He received the Presidential Medal of Freedom in 2012.

His family and invited guests, including astronauts and dignitaries, will say goodbye to the first American to orbit Earth at a private service at the Old Post Chapel beginning at 9 a.m.

The U.S. Marine Corps will begin a live stream at 9:40 a.m. that will include a processional to the graveside by caisson, a flyover, a graveside service and taps. The event ends at 10:25 a.m.

Thousands of mourners visited his casket as it lay in repose at the Ohio Statehouse, and roughly 2,500 people attended a public “celebration of life” for the former fighter pilot, history-making astronaut and longtime Democratic U.S. senator from small-town Ohio.

Moments Ago, Pres Trump HUMILIATED Nancy With EPIC BLOW She Will Never Forget